For the last installment in our Three Part Series of the Juiciest True Crime and True Mystery Podcasts Ever, we’ve decided to step away from all the crime and death and focus on unsolved mysteries.  Here are the most mysterious and interesting unsolved mysteries the podcast world has to offer.

Mary Celeste (often misreported as Marie Celeste)[1] was an American merchant brigantine that was found adrift and deserted in the Atlantic Ocean, off the Azores Islands, on December 4, 1872, by the Canadian brigantine Dei Gratia. She was in a disheveled but seaworthy condition, under partial sail, with no one on board, and her lifeboat missing. The last log entry was dated ten days earlier. She had left New York City forGenoa on November 7, and on discovery was still amply provisioned. Her cargo of denatured alcohol was intact, and the captain’s and crew’s personal belongings were undisturbed. None of those who had been on board—the captain and his wife, their two-year-old daughter, and the crew of seven—were ever seen or heard from again. – Wikipedia

Ever since construction commenced in 1884, the property and mansion were claimed by many, including Winchester herself, to be haunted by the ghosts of those killed with Winchester rifles. Under Winchester’s day-to-day guidance, its “from-the-ground-up” construction proceeded around the clock, by some accounts, without interruption, until her death on September 5, 1922, at which time work immediately ceased.[3] Sarah Winchester’s biographer, however, claims that Winchester “routinely dismissed workers for months at a time ‘to take such rest as I might.'” and notes that “this flies in the face of claims by today’s Mystery House proprietors that work at the ranch was ceaseless for thirty-eight years.” – Wikipedia

The SS Ourang Medan was a ghost ship which, according to various sources, became a shipwreck in Indonesian waters after its entire crew had died under suspicious circumstances. Skepticism exists about the truthfulness of the story, suggesting that the ship may have never actually existed, but has become something of a legend. – Wikipedia

The Wow! signal is the name given to a strong narrowband radio signal detected by Jerry R. Ehman on August 15, 1977, while he was working on a SETI project at the Big Ear radio telescope of The Ohio State University, then located at Ohio Wesleyan University‘s Perkins Observatory in Delaware, Ohio. The signal bore the expected hallmarks of non-terrestrial and non-Solar System origin. The signal appears to have come from the northwest of the globular cluster of M55 in the constellation Sagittarius, near the Chi Sagittarii star group.

The entire signal sequence lasted for the full 72-second window that Big Ear was able to observe it, but has not been detected since. The signal has been the subject of significant media attention, and astronomers have tried many times in vain to find the signal again. Impressed by the relative resemblance of the expected signature of an interstellar signal in the antenna used, Ehman circled the signal on the computer printout and wrote the comment “Wow!” on its side, which became the name of the signal itself. – Wikipedia 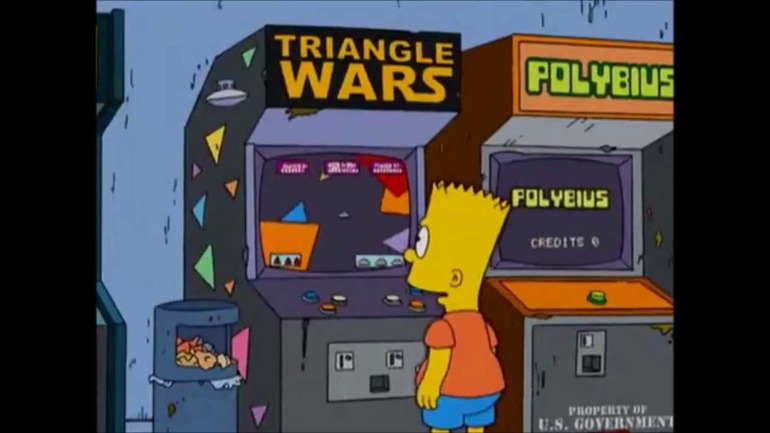 Polybius is an arcade cabinet described in an urban legend,[1] which is said to have induced various psychological effects on players. The story describes players suffering from amnesia, night terrors, and a tendency to stop playing all video games. Around a month after its supposed release in 1981, Polybius is said to have disappeared without a trace.[2] There is no evidence that such a game has ever existed.[3]

Polybius is thought to take its name from the Greek historian of the same name[1] who was known for his assertion that historians should never report what they cannot verify through interviews with witnesses. – Wikipedia 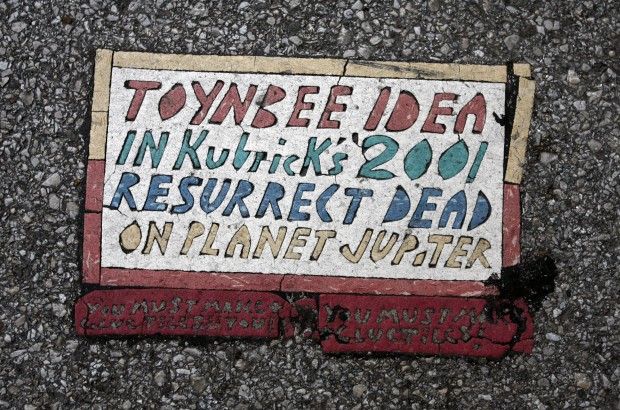 The Toynbee tiles (also called Toynbee plaques) are messages of unknown origin found embedded in asphalt of streets in about two dozen major cities in the United States and four South American cities.[1][2] Since the 1980s, several hundred tiles have been discovered. They are generally about the size of an American license plate (roughly 30 cm by 15 cm), but sometimes considerably larger. They contain some variation of the following inscription:

Some of the more elaborate tiles also feature cryptic political statements or exhort readers to create and install similar tiles of their own. The material used for making the tiles was initially unknown, but evidence has emerged that they may be primarily made of layers of linoleum and asphalt crack-filling compound.[3] Articles about the tiles began appearing in the mid-1990s, though references may have started to appear in the mid-1980s. – Wikipedia 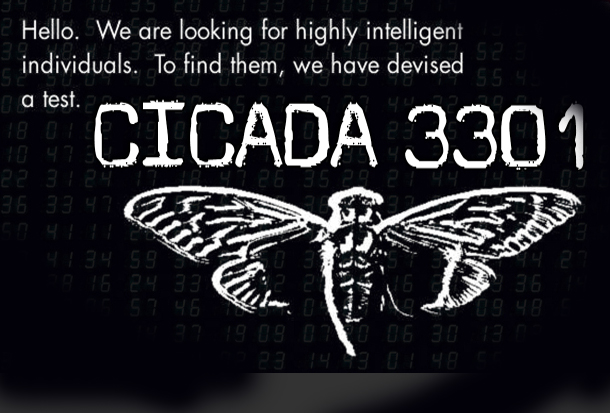 Cicada 3301 is a name given to an enigmatic organization that on three occasions has posted a set of complex puzzles and alternate reality games to recruit “highly intelligent individuals” from the public.[1] The first internet puzzle started on January 4, 2012, and ran for approximately one month. A second round began one year later on January 4, 2013, and a third round is ongoing following confirmation of a fresh clue posted on Twitter on January 4, 2014.[2][3] The stated intent was to recruit “intelligent individuals” by presenting a series of puzzles which were to be solved, each in order, to find the next. No new puzzles were published on January 4, 2015. The puzzles focused heavily on data security, cryptography, and steganography. – Wikipedia